There are four main kinds of word formation: prefixes, suffixes, conversion and compounds.

Prefixes
We add prefixes before the base or stem of a word.

We add suffixes after the base or stem of a word. The main purpose of a suffix is to show what class of word it is (e. g. noun or adjective).

Conversion involves the change of a word from one word clases to another. For example, the verbs to email and to microwave are formed from the nouns email and microwave:

Can you text her? (verb from noun text, meaning to send a text–message)
If you’re not careful, some downloads can damage your computer. (noun from verb download)

We also use conversion when we change a proper noun into a common noun:
Has anybody seen my Dickens? (copy of a book by Dickens) 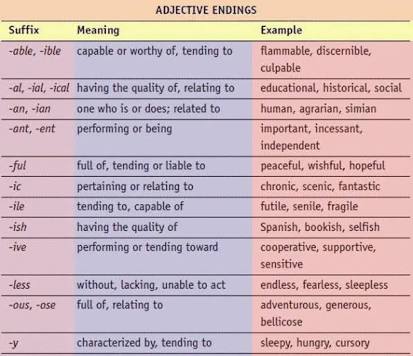 The grammar names of the parts of the speech should only be used during the time of the activity so members are able to identify them accurately but not during normal workouts.