On August 15, 1969, a music festival called «Woodstock» transformed one small dairy farm in upstate New York into a gathering place for over 400,000 young music fans. Concert-goers, called «hippies,» traveled from all over the country to see their favorite musicians perform. Famous artists like The Grateful Dead played day and night in a celebration of peace, love, and happiness. Although Woodstock lasted only three days, the spirit of the festival has defined a generation and become a symbol of the «hippie life.»

One of the curious facts is that Two bands were scheduled to play Woodstock but were unable to make the festival. The Jeff Beck Group, where Rod Stewart used to play, broke up only weeks before the festival and Iron Butterfly, who were stuck at LaGuardia Airport in New York and couldn’t get to the festival by ground transportation, so they demanded the festival promoters send a helicopter for them.

During the three days of the Woodstock festival, there were no reported incidents of violence among the half-million people in the audience. Which is hard to believe but glad to be reminded nowadays in such an enormous amount of people attending to a massive rock concert.

Follow the lyrics of your favorite songs while singing them.

Is it possible to define Rock music without Woodstock? 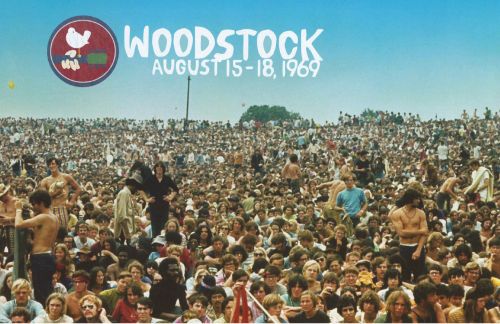 Welcome to this activity created by Junior Advisor Mr. Rodrigo Valdés from Santa Fé Branch. Take note of all the pink words, read the text, watch the video and answer the question in the comment section below.