«We Are One (Ole Ola)» is a song recorded by Cuban American rapper Pitbull (2014). It is the official song of the 2014 FIFA World Cup and features guest vocals from American singer Jennifer Lopez and Brazilian singer Claudia Leitte. The artists co-wrote the song with Sia, RedOne, Danny Mercer, Dr. Luke, Cirkut, and Thomas Troelsen; the latter three are also the producers «We Are One» has experienced commercial reaching the top 20 in countries including Austria, France, Germany, Italy, Spain, and World Cup’s host country, Brazil. The song went to its peak at no.1 in 3 countries.

In February 2014, Pitbull, Leitte and Lopez shot the music video for «We Are One (Ole Ola)» with Olodum in Fort Lauderdale, Florida, United States. Its concept was to simulate Carnival in its home country Brazil with the Olodum mix of the song being used as the soundtrack.

Pitbull, Lopez and Leitte performed «We Are One (Ole Ola)» at the 2014 Billboard Music Awards on 18 May 2014.They also performed the song at the 2014 FIFA World Cup opening ceremony on June 12 in Arena Corinthians, São Paulo, prior to the Brazil vs Croatia match. However, due to the amount of noise made by dancers and poor quality stadium aesthetics, some spectators had difficulty hearing the vocals.

Check the lyrics of the song and try to sing it at the same time to improve your pronunciation and intonation. 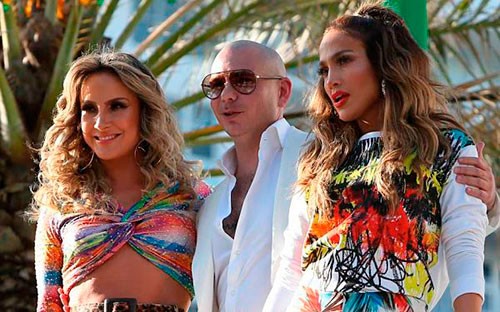 Welcome to this activity created by Learning Advisor Ms. Mercedes González Martínez from Coapa Branch. Take note of all the pink words, read the text, watch the video and answer the question in the comment section below.