«Waka Waka (This Time for Africa)», called «Waka Waka (Esto es África)» in Spanish, is a song by Colombian singer Shakira, featuring the South African band Freshlyground. It was released on 7 May 2010 by Epic Records as the official song of the 2010 FIFA World Cup, which was held in South Africa. Waka Waka is a pop song whose lyrics encourage one to aim for their goals like a soldier on a battlefield.

The music video for «Waka Waka (This Time for Africa)» was directed by Marcus Raboy. It became popular on YouTube, receiving 1.8 billion views as of May 2018 and becoming the twenty-eighth most-watched video of all time on the site. It features cameos by various soccerballers like Cristiano Ronaldo and Lionel Messi. Shakira performed the song at the 2010 FIFA World Cup opening ceremony on 10 June as well as at the closing ceremony on 11 July. It was also included on the set list of her The Sun Comes Out World Tour (2010–11).

The song, «Waka Waka draws inspiration from traditional African music and blends an African Colombian rhythm with a Soca-influenced beat. It contains instrumentation from a Southern African guitar. The chorus of the song and the words «waka waka» are borrowed from «Zangaléwa,» a 1986 song recorded by Cameroonian band Golden Sounds, which was a hit not only across Africa but also in Shakira’s native country, Colombia. The lyrics of «Waka Waka compare soccer-players to soldiers on a battlefield and encourage them to fight for their goals.

Try to explain the choreography to another person in English. 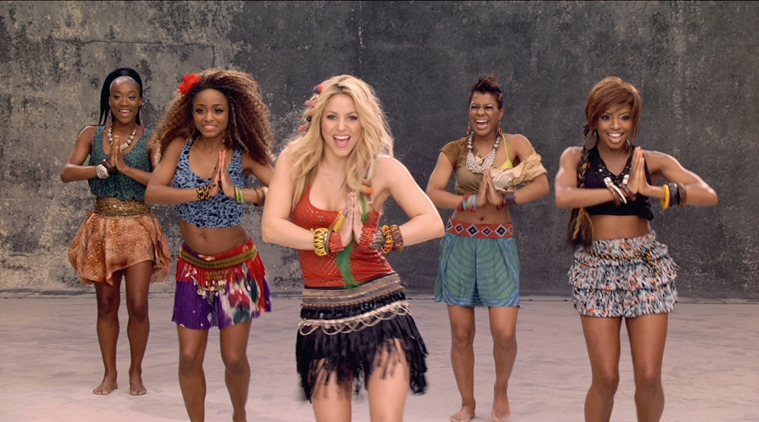 Welcome to this activity created by Learning Advisor Mr. Erick Emmanuel Uriostegui García from Satelite Branch. Take note of all the pink words, read the text, watch the video and answer the question in the comment section below.