Vladímir Vladímirovich Putin was born in Leningrad (Saint Petersburg), URSS (nowadays Russian Federation), October 7, 1952, his father was a Soviet Marine officer, his mother was a fabric worker, the youngest of three siblings, who died at an early age.

Putin studied in Public school No. 193, where he learned sambo and judo (he has a black belt in judo), afterwards he studied Laws at the Leningrad State University, where he degreed with honors thanks to his thesis about USA’s politics in Africa.

He has his own comic, in which he is a superhero called “Superputin”, his favorite group/band is The Beatles, he is so famous that there are Vodkas, watches, shirts, perfumes with his sign, he has also driven a Formula 1 car.

He was re-elected just in 2018 for his 5th period as Russia’s ruler.

Practice at least ten different verbs each week, in order to increase our vocabulary and to practice, more than anything else, irregular verbes and its tenses. 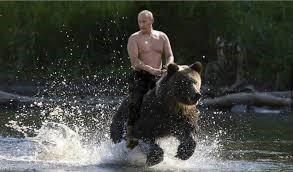 Welcome to this activity created by Learning Advisor Mr. Rodrigo Valdés from Santa Fe Branch. Take note of all the pink words, read the text, watch the video and answer the question in the comment section below.