Vasily Andreyev was born in Bezhetsk, Tver Governorate, Russia to the family of an honorary citizen of Bezhetsk and merchant of the first guild, Vasily Andeyevich Andreyev and his wife, the noblewoman Sophia Mikhaylovna Andreyeva. When the boy was one year old, his father died. The family moved to Saint Petersburg, where the boy was brought up by his stepfather, Nil Seslavin. At the age of ten, Vasily began playing the balalaika and other folk instruments

Initially, Andreyev was studying to play the violin and working as a musician in the various salons catering to European tourists to the Russian capital. On numerous occasions, he was asked about performing traditional Russian music, and he started collecting examples. He once came upon a peasant playing a balalaika and had the instrument copied. His solo performances were very popular, and a group of players developed around him. He also developed an ensemble playing different sized balalaikas that proved to be very successful. Ultimately, the group grew into a full orchestra.

The popularity of Andreyev’s group grew significantly after their performance in Paris, France at the world Exhibition, where they became celebrities.

Sing aloud in English every day to improve your pronunciation. 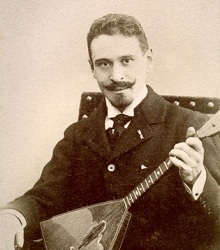 Welcome to this activity created by Senior Advisor Ms. Violeta Trujillo from Santa Fe Branch. Take note of all the pink words, read the text, watch the video and answer the question in the comment section below.