You know the fable. That Steve Jobs is the greatest tycoon of our while. He co-founded Apple Computer. He was the impelling cause after the iPod, the iPhone, the iPad. This is rather unsuitable for right-wing conservative die-hards to accept, because Jobs was also a pot-smoking hippie who dropped out of college.

More astounding news at concerned JJB Sports. The maltreated retailer, which almost collapsed into administration at the turn of the year, has received a welcome boost from the world’s richest man. It emerged yesterday that Bill Gates has been quietly building up a stake in the firm, which was mired in controversy over recent weeks.

«Though they never worked in the same company, they created an industry together, and we have a hippie and a nerd … With Bill, it was always about the money. With Steve … money was nice, but it was never about the money. And so that made them black and white. Up and down. Hot and cold. They were very, very different people,» says journalist Robert Cringely, who worked with Gates and Jobs in the late-1970s.

Listen and practice the most of the new vocabulary you’ll find in the video! 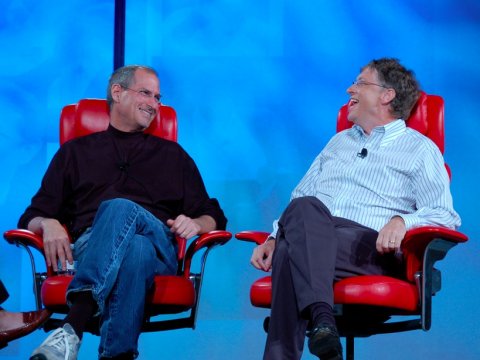 Welcome to this activity created by Junior Advisor Mr. Daniel González from Narvarte Branch. Read the text, watch the video and answer the question in the comment section below.