Spain is one of only eight countries ever to have won the FIFA World Cup, which it did at the 2010 FIFA World Cup, in South Africa, the first time the team had reached the final. The team is one of the most present at the World Cup finals, with 14 appearances out of the 20 tournaments. Spain reached fourth-place in 1950, and has reached the quarter-finals four times. The Spanish team has also won three UEFA European Football Championships, in 1964, 2008 and 2012 and the Olympic football tournament in 1992.

The Spanish team went to the 2010 World Cup in South Africa as European Champions and enjoyed a record unbeaten streak of 35 matches from 2007 to 2009. Although they lost their first match against Switzerland by 1-0, they went on to win the group after victories over Honduras and Chile while the Swiss failed to win another match and were eliminated.

The Spanish team won all three following knockout matches by 1-0, always scoring in the second half of regular time. The opponents were Portugal, Paraguay and Germany.

It was Spain’s first and the Netherlands’ third appearance in a World Cup final, but neither had ever won trophy. Spain was the dominating side with 57% ball possession, but the Dutch opponents had several chances as well. In a rough match, referee Howard Webb showed fourteen yellow cards and sent off Dutch defender John Heitinga in the second half of extra time, after regular time ended goalless. However, even with the five yellow cards received in the final, the Spanish team was awarded the FIFA Fair Play Trophy after collecting only eight yellow cards in seven matches. The winning goal was scored by Andrés Iniesta, a right foot strike from inside the box after an assist by Cesc Fàbregas.

For the Massive you will prepare a debate to defend which to you has been the most shocking or amazing moment in a World Cup. 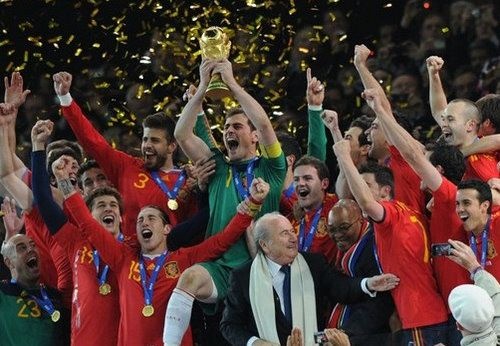 Welcome to this activity created by Learning Advisor Mr. Marcos Daza from Reforma Branch. Take note of all the pink words, read the text, watch the video and answer the question in the comment section below.