The story of Rudolph the Red-Nosed Reindeer started in 1939 with  Robert May. He worked for Montgomery Ward, a department store. Every year, they gave away free Christmas colouring books, they decided to create their own book. They gave the task of writing it to May with the instructions: make it about an animal. When Rudolph the Red-Nosed Reindeer came out at Christmas 1939, it was an instant hit. Montgomery Ward gave out 2.4 million copies, the head of Montgomery Ward, perhaps moved by the spirit of the holiday, gave all the rights for Rudolph to Mr May. It was the first time the company had ever done so.

Rudolph had a big, bright red nose. It was not a regular reindeer nose at all, it was so bright it seemed to glow. The other deer teased him, and they laughed about Rudolph’s nose.

Santa climbed into the sleigh and he set of, and it was so dark he couldn’t even see the lead reindeer. Time was passing and it became clear that no headway was being made. Santa was flying in circles. Santa asked Rudolph if he would mind helping out with the sleigh, that big shiny nose is just what he needed to stay on track. Rudolph went to the front of the team.

Have fun singing Christmas Carols and practice with the lyrics your pronunciation, intonation and learn new vocabulary .

What is the importance of Rudolph in the Christmas Tale? 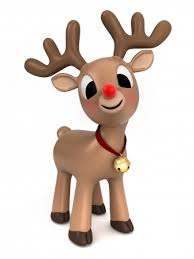 Welcome to this activity created by Regional Leader Mr. Francisco Tejeda from Polanco Branch. Take note of all the pink words, read the text, watch the video and answer the question in the comment section below.