In today’s world there’s different way to record videos. A lot of people now use their smartphones, for example youtubers, vloggers, and instagramers.  These people use smartphone like Apple iphone and Samsung galaxy, which are the most common.

These phones have a very good camera that could record very good quality videos. A lot of youtubers start with smartphones and then they will upgrade to a better camera like Nikon and Canon. A lot of vloggers have differences between these cameras. You’ll notice, there are basically only Nikon and Canon DSLR video cameras that dominate the market. This debate of Canon vs. Nikon is relatively popular among video camera enthusiasts, but our recommendation is to keep in mind that a brand is a brand, and to go for a model that you feel fits your needs as opposed to based off of a name on the camera. Once the video is recorded vloggers will edit their videos.

Video editing is important because it is the key to blending images and sounds to make us feel emotionally connected and sometimes truly there in the film we’re watching. It’s a safe assumption to say that video editing is among the most important jobs in the film industry.

Record yourself speaking in English and explaining a topic you know really well. 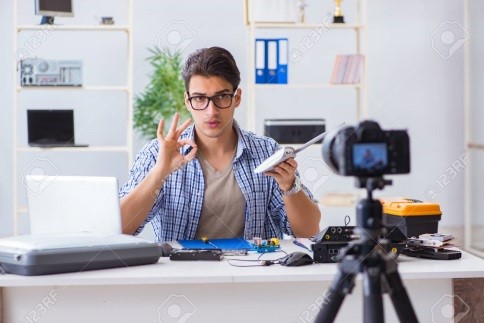