The largest island in Thailand, Phuket is a mountainous province located in the southern tip of the Andaman Sea. It was originally valued by 17th century Dutch and English explorers as a rich source of tin. The resulting mining industry drew thousands of Chinese laborers to the island. Today, their cultural influence can still be felt in the island’s many shops, restaurants and temples.

Phuket comprises approximately 590 square kilometers, including 39 surrounding islands. Seventy percent of the land is covered by mountains, which stretch from the northwestern tip of the island to the southern edge. The remaining 30 percent is plains.

Phuket has a wide variety of activities and attractions for the millions of tourists who travel there each year. Snorkeling, scuba diving, swimming and boating are among the most popular outdoor activities, though travelers can also experience more exotic attractions such as elephant rides, safaris and all-terrain vehicle tours.

Boxing is one of Thailand’s most popular spectator sports and a growing favorite among Phuket travelers. The island also has an active nightlife, with countless bars, restaurants, discos and cabarets, as well as world famous full moon parties.

Phuket has its own international airport located in the northern end of the island.

Read a lot of travel articles to improve your reading skills. 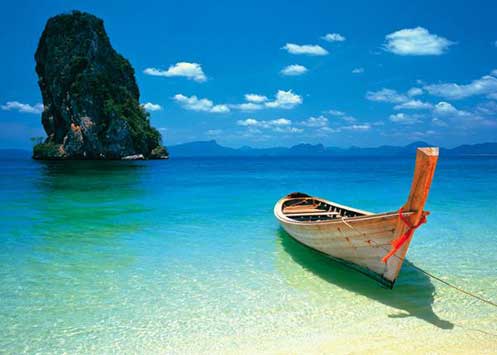