During the Cold War, silent black-and-white films were produced, in which she appeared to move objects on a table in front of her without touching them. These films were whom believed that they represented clear evidence for the existence of psychic phenomena. According to reports from the Soviet Union, 40 scientists, two of whom were Nobel laureates, studied Kulagina. In Investigating Psychics, Larry Kettlekamp claims that Kulagina was filmed separating broken eggs that had been submerged in water, moving apart the whites and yolks, during which event such physical changes were recorded as accelerated and altered: heartbeat, brain waves and electromagnetic field.

Kulagina claimed that she first recognized her ability, which she believed she had inherited from her mother, when she realized that items spontaneously moved around her when she was angry. Kulagina said that in order to manifest the effect, she required a period of meditation to clear her mind of all thoughts. When she had obtained the focus required, she reported a sharp pain in her spine and the blurring of her eyesight. Reportedly, storms interfered with her ability to perform psychokinetic acts.

One of Kulagina’s most celebrated experiments took place in a Leningrad laboratory on 10 March 1970. Having initially studied the ability to move inanimate objects, scientists were curious to see if Kulagina’s abilities extended to cells, tissues, and organs. Sergeyev was one of many scientists present when Kulagina attempted to use her energy to stop the beating of a frog’s heart floating in solution. He said that she focused intently on the heart and apparently made it beat faster, then slower, and using extreme intent of thought, stopped it.

If you want a better understanding of the story, you can read a summary here. 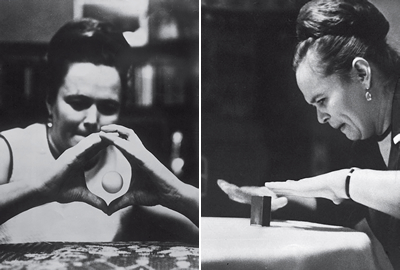 Welcome to this activity created by Junior Advisor Mr. Luis Fernando Mondragón Herrera from Polanco Branch. Take note of all the pink words, read the text, watch the video and answer the question in the comment section below.