Barbary sheep are naturally found in Northern Africa in Algeria, Egypt, Libya, Morocco, Sudan and northern Chad. There are introduced populations in southeastern Spain and southwestern United States, Mexico and some parts of Africa. The Barbary sheep is about 80 to 100cm tall at the shoulder and they weigh between 40 to 140kg. The horns can reach up to about 50cm.The Barbary sheep has a light reddish brown short, bristly outer coat that blends in well with the sandy rocks of the Desert Mountains, and darkens as the animal ages. They have large horns that curve outwards, backwards and then inwards again, with the horns of the male being longer than those of the female.

The Barbary sheep can live about 15 years although they have been known to live to 20 years. Barbary sheep are grazers and will eat a wide variety of grasses, flowers, young plants, leaves and shrubs. They are able to go without water for a long period of time. The Barbary sheep live in small family groups usually having one dominant male for a group of females. Barbary sheep’s are endangered and are listed as vulnerable in the IUCN Red List of threatened species. Barbary sheep populations are quite healthy in some large protected national parks.  But in some parts, their populations are declining because of some habitat destruction.

Do some research about the endangered species in your country. 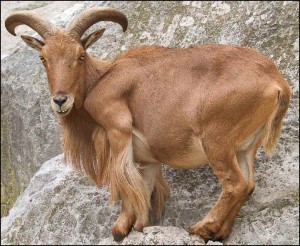