The School of Rock is one of the best movies in history. This movie is about a musician called Dewey Finn who participates in a rock band. This character is a rebel and loves playing solos. Because of his rebellious attitude and opposition to the system, he starts having problems with the members of his own band, which causes his own dismissal.

Living poorly, one day he receives a call from his friend Ned giving him an offer. This offer constitutes in working as a substitute professor in one of the most prestigious primary school: Horace Green.

In there, he finds the strict director Molins. Even though, he doesn’t know how to give a class, he knows how to win his students’ trust and elevate their self-esteem. Finally, one day, just passing by, he listens them playing classical music and decides to turn them into a rock band changing their lives forever.

Watch a movie only with subtitles in English, so that you can acquire more vocabulary! 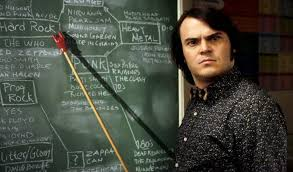 Welcome to this activity created by Junior Advisor Ms. Rebeca Parés from Santa Fe Branch. Take note of all the pink words, read the text, watch the video and answer the question in the comment section below.