On this day, Nelson Mandela was released unconditionally from prison after 27 years. Accompanied by his then-wife Winnie, he left the Victor Verster prison (later renamed Drakenstein Correctional Centre) on the outskirts of Paarl and was driven the 60 kms to Cape Town by African National Congress’ (ANC) Rose Sonto along a route lined by thousands of supporters.

On the balcony of the City Hall he spoke to a crowd of approximately 50 000 people, who had waited for hours to see him. He started by expressing his sincere and warmest gratitude to the «millions of my compatriots and those in every corner of the globe who have campaigned tirelessly for my release».

In commemoration of his release, people across the country danced joyously in the streets. Unfortunately the revelry also caused some problems, as doctors had to treat over a hundred people as police clashed with youths looting shops in various cities and townships. In Mdantsane, Ciskei, 10 people were killed when Ciskei soldiers used force against a group of revellers celebrating this liberation figure’s release. Mandela’s release can be seen as the beginning of the new South Africa.


If you want a better understanding of this situation you can read it here. 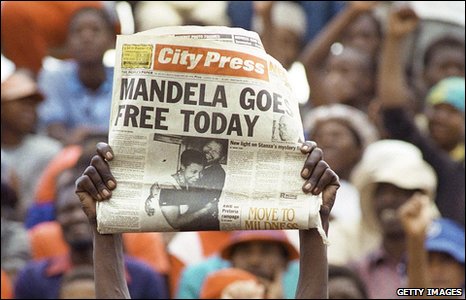