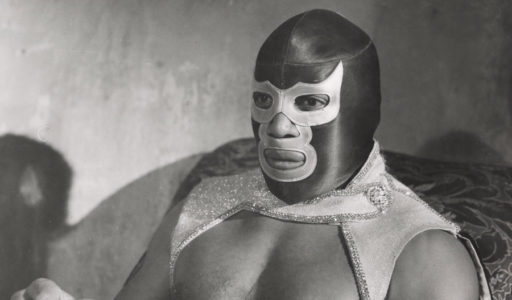 Blue Demon is one of the biggest legends in Mexican wrestling (Lucha libre). Alejandro Muñoz Moreno was born in 1922, he was the fifth son among his eleven brothers. Alejandro and his family lived in Nuevo Leon, a state north of Mexico but at an early age he moved to Monterrey with his uncle.

When Alejandro was old enough he began working on the National Railroad until being an engine driver assistant. Among his co-workers there was Rolando Vera a professional wrestler who started to teach him how to fight in that discipline. Meanwhile, he met his wife Goyita and after two years of relationship they got married. 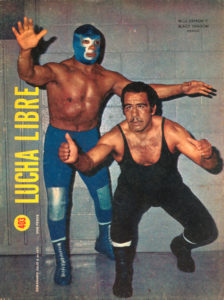 His début was in 1948 against the professional wrestler Chema Lopez in Laredo, Texas where he showed an amazing exhibition of strength and skill winning the fight. It was his friend and tutor Rolando Vera who named him Blue Demon and set history without even knowing.

A few years later, he was invited to Mexico City by Jesús Lomelí and his performance was so impressive that he got the title of Amateur of the Year. His first exhibition in Mexico City was in 1948, taking the part of a ‘rudo’.

A heel, or rudo, is an antagonist in a wrestling fight, normally they behave in a rude manner in order to provoke the audience’s discontent. The ‘tecnico’ or the “good guys”, follow the rules and they try to never do anything dishonest in a fight.

From then on, Blue Demon started to build his career but it was until he fought against the legend of Mexican wrestling, El Santo, that people began paying attention. El Santo was a sensation back then and the idea of a new wrestler that could beat him was outrageous. The moves and technique Blue Demon had blew people’s minds and an emblematic rivalry was originated.

This first confrontation between both wrestlers ignited the idea of a challenge, Blue Demon defied El Santo for the NWA World Welterweight Championship. That night of 1953 in Arena Coliseo, Blue Demon showed his abilities and defeated his opponent. 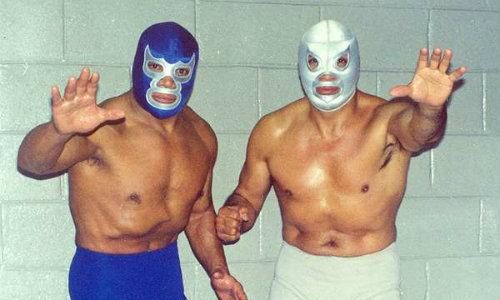 Due to this triumph, fans asked Blue Demon to change his side to the technicians and so he did. Afterwards, his career in cinema took off with the movie Blue Demon, el Demonio Azul, and he completed 26 more films later.

Blue Demon and El Santo starred many movies together and mostly as partners against the dark forces. However, their professional feud was constantly present and never became friends. Their movies are now an eternal classic in which they battle monsters such as vampires, mummies, zombies, witches and even werewolves.

Despite of suffering serious injuries in different occasions, it was untiI 1988 when Blue Demon decided to retire. Nevertheless, he wouldn’t leave before some last epic fights in which he was able to remove the masks of his enemies. In 1989 he showed up for a final match side by side with his adoptive son, Blue Demon Jr. and then he dedicated his life to teach and to his family.

Blue demon will always be an icon of the Mexican Lucha Libre and a legend that never lost its mask. He passed away in 2000 due to a heart attack at the age of 78. His career as a wrestler, actor, and superhero will be remembered in the pages of Mexican history.

Which side are you on?