Compare any two elements in a design. Either the elements will be equal in every way or one will exert some level of dominance over the other. The most dominant element will attract the eye and get noticed first. It might even appear to exhibit some sort of control over the less dominant element.

The most dominant element likely has greater visual weight than the elements it dominates. It will seem to exert some kind of force on what is surrounding.

To do that, you create dominance through contrast, emphasis and relative visual weight. Identical items can’t dominate each other, so, to exert dominance, an element has to look different from the elements it’s meant to dominate.

You can create dominance through visual direction as well. For example, you might surround an element with arrows all pointing to that element. If there are enough directional cues, the element could become dominant even if it’s of lesser visual weight than other elements on the page.

You can also have co-dominance, where two dominant elements exist within a composition. However, both will compete for attention and could ultimately be distracting without the right overall balance in your competition.

Ideally, you want a single dominant element. However, remember this, you can’t emphasize everything. It defeats the point. When you try to do that, all of the design elements compete for attention and nothing stands out. They’re all yelling at the same time. Everything is louder, but still nothing is heard. 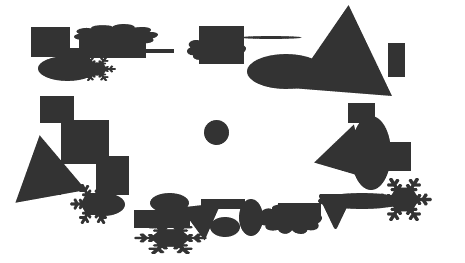 To create any kind of visual representation you have to know beforehand what dominant element you are going to stand out.

Welcome to this activity created by Learning Advisor Mr. Noé Salvador Cuervo Carvallo from Narvarte Branch. Take note of all the pink words, read the text, watch the video and answer the question in the comment section below.