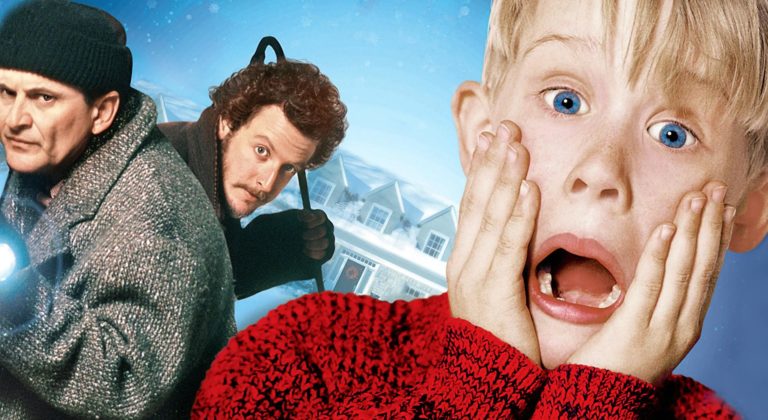 Home Alone is an iconic franchise that we cannot stop watching every year around Christmas season. The franchise started in 1990 with the first film directed by Chris Columbus. There are five movies, however, we’re going to focus in the first two which are truly representative of the Christmas season.

The plot revolves around Kevin McCallister, performed by Macaulay Culkin, the youngest boy of a big family who is tired of the way they treat him. The McCallisters organized a family vacation to Paris and in an unexpected turn of events, they forgot Kevin at home. The naive kid thinks his wish of making his family disappear came true and starts to enjoy his time alone.

Nevertheless, a pair of thieves were planning to break into his house while his family is away. The smart young boy sets a strategy to scare them away with a complex series of traps. Meanwhile, his family is trying to get back home without knowing his son is facing criminals.

The outstanding wit of Kevin not only helped him survive, but also to catch the thieves. When his family finally returns he’s really happy his wish didn’t work out and understood the importance of family.

The second part has a slight twist, this time they don’t forget about him at home. Instead, he gets lost in another city. With the rush of getting into a plane, Kevin boards the wrong flight and instead of flying to Florida, he ends up in New York City. Kevin enjoys the good life in the “city that never sleeps” without regrets.

Unfortunately, the same thieves that tried to steal the McCallister belongings escaped from prison and stumble upon the lonely boy. Kevin manages to escape from their grip but as he finds out they’re trying to steal the money of a donation to a children’s hospital from a toy store, he decides to make up a plan again.

Both movies are full with funny mischief and cute moments and everything is around Christmas and the love and importance of family on those days. In the franchise we can see this element repeating over and over. The message goes to young and old in any family. All people have problems but we must not forget how much we love our family and to try to solve problems instead of running away from them.

Which is your favorite part of both movies? Tell us about it in the comment section below.