Mexican cuisine is an incredible combination of multicultural flavors and it has been declared world cultural heritage by UNESCO. Considering the former, we can’t write about authentic Mexican food without considering its varied fusions between the indigenous, Spanish and international cultures.

The Spanish conquered Mexico in 1521 but talking about food, they brought many ingredients that enriched the Mexican cuisine until our days. 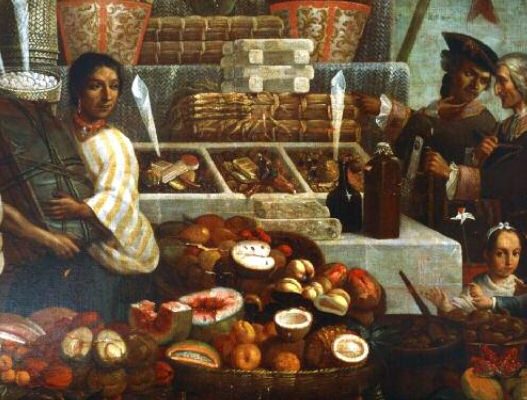 Before the Spanish arrived we didn’t have milk nor cheese, garlic, pork, rice, mango or even oregano. Can you imagine a pozole without oregano? Or quesadillas without cheese! Well that’s a discussion between the people from Mexico City and the rest of the country that we’ll leave for later.

Great influence of Spanish cuisine was performed in the convents. Many of the dishes we know have their origins in a convent like chile en nogada or mole poblano. The ingredients for some recipes were considered too strong for the Spanish palate so it had to be smoothed out. The nuns added cheeses and creams to achieve less spicy dishes.

It started in Mexico with the cacao and a spicy beverage which was so especial only the emperor was able to drink it. When the Spanish tried it out, they weren’t pleased but intrigued. Afterwards they added sugar and cinnamon to it, but it was until this exotic beverage arrived to Switzerland that was combined with milk and the chocolate we know was born.

The vinegar was also brought by the Spanish and is used in the traditional cuisine of Yucatan, without it we wouldn’t have cochinita pibil for instance.

Sor Juana Inés de la Cruz the famous nun known for her brilliant work in poetry and philosophy also wrote a book of recipes. The dishes displayed in her book are a clear example of the fusion between the two cultures of the viceroyalty period. Milk-based candies dulce de leche or the jericalla show a big influence from New Spain.

The fusion between Mexican cuisine and Spanish is so intertwined that now it’s very difficult to the common folk to distinguish its origins. On top of that, the fusion is centuries old so many other cultures have joined to create many dishes that are now considered traditional.