Christmas is a global holiday, enmeshed in local traditions and interpretations. More than the religious ceremonies, in which only some celebrants participate, it is a family feast celebration.

The food that fuels that feast has never been free of politics. The dishes that dot the contemporary table reflect the enduring strength of Britain’s culture, the long-term impact of America’s culture wars and the power of agribusiness. It’s the intersection of those influences that makes the modern Christmas.

The roast turkey is a relatively recent British tradition, first gaining popularity in the 18th century, and adopted by colonial Americans as a celebration food while the future United States was still an imperial possession.

In many ways, the original “War on Christmas” was fought in the late 19th century when different Christian immigrant traditions: German, Italian, Polish and others, collided with these older British influenced customs. For instance, an 1899 Christmas banquet for poor immigrants thrown by New York Sen. John Sullivan aimed to feed people living on the edge of poverty, but it also had an ulterior motive: to teach newcomers American customs, which included a table groaning with turkey. This culture war pit elite eating habits, which were rooted in British traditions, against lower-class, immigrant culinary ones. 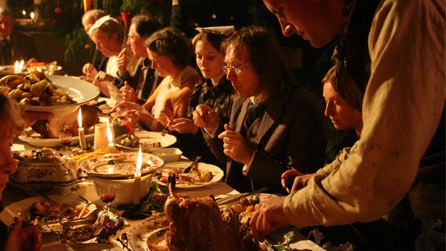 Read more about the origins of Christmas Dinner and the whole pagan tradition.

Welcome to this activity created by Junior Advisor Ms. Zaira Sánchez from Narvarte Branch. Take note of all the pink words, read the text, watch the video and answer the question in the comment section below.