All  of  the  construction  works  on  the  territory   of  seventeen  thousand  square  meters,  including  interior  finishing   and  curb  appeal,  were  completed  in  two  years.   Each  building,  especially  the  classical  one,  is  unique.  In  this  particular  project  the  center   of  the  composition  was  the  magnificent   bronze  tree   of  20  meters  high,   which  represented  the  cultivated   nature  and  noble   work  of  farmers.

The  building  is  also  decorated  with   winged  snow  leopards,  which  represent  the  symbol  os  statehood of  the  Republic  of  Tatarsan.

Try  to  come  up  with  design  of  a  building  that  has  some  characteristics   similar  to  the ones of  the  Agricultural  Place. 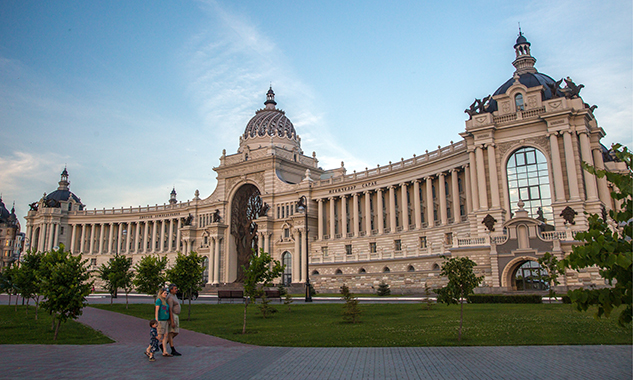 Welcome to this activity created by Team Leader in Charge Mr. Juan Guadalupe Vaca Pérez from Satelite Branch. Take note of all the pink words, read the text, watch the video and answer the question in the comment section below.